sheʼs sure weʼll remind them,
everytime we sees the ring weʼre wearing.

Hearing her thoughts,
her teacher agreed and said,
“I will bless it with succeeded sacred mantra.”
“You who have good energy and I can make
the authentic and wonderful ring for people.”

Ⅰ Go means ﬁve and En is circle, ring
in Japanese.
Tra is the tra of Mantra
in Sanskrit
so it means protection.
This ring will protect you,
your whole ﬁve dimensions

・・・Have you ever heard about
ﬁve inter-connected dimensions
of the human system?

In Vedic philosophy,
itʼs considered that the human being is
a wonderful and holistic entity
constituted of ﬁve inter-connected dimensions.
Each of these ﬁve dimensions
hold a key and unique responsibility
in sustaining holistic health,
while yet nourishing the other dimensions.
Together they provide us a sacred framework
for overall health, expression of our potential,
and our spiritual evolution.
A harmony between them in a healthy manner
is key to a balanced and fulﬁlling life.

Ⅱ Goen or En also means connection.
Especially these words include the meaning of
“the universe brought us together” in Japanese.
This ring will protect the connection
with inside of yourself and your mission, darma, and
also the connection with your important person. 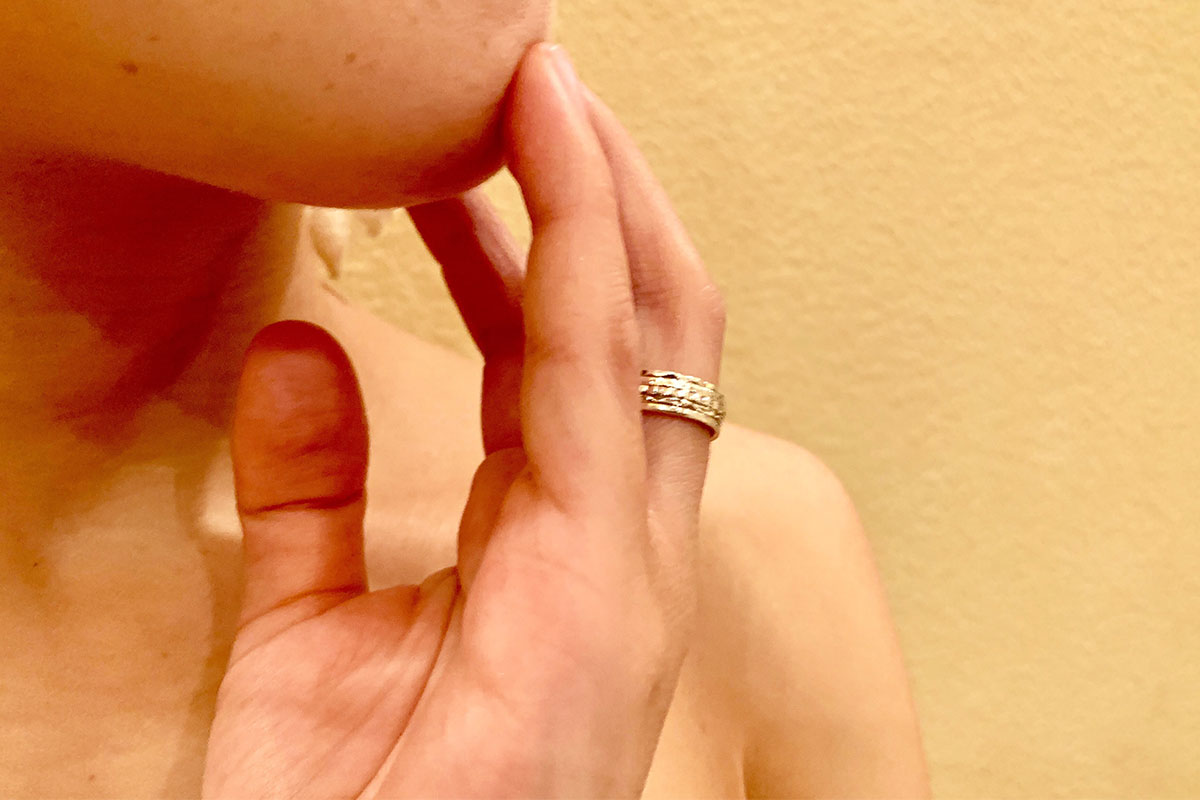 the design of the ring

This ring was made up of ﬁve rings
which express each dimensions
and the ring is blessed
using traditional Vedic procedures
so that each of ﬁve dimensions can work
as it is and as they are.

Dimension1,
Annamaya is on surface
and our physiological construct
that is made up of the ﬁve elements
and provides us the overall structure
and support for our body.

→We designed this dimension
with unevenness and roughness,
expressing our physiological body.

Dimension2,
Pranayama is our energetic dimension
that fuels all of our organs and emotions
to fulﬁll their duty.
This dimension also provides us
the needed vitality to sustain life and eliminate toxins.

→We expressed this dimension
using grains imaging quantum prana
which can ﬂy freely.

Dimension3,
Manomaya represents our intellectual patterns
through which our mind and senses
perceives and remembers the way
we see and interact with the world.

→We expressed this dimension like boxes
which we can put things in to discriminate.

Dimension4,
Vijnanamaya is our emotional and behavioral construct
that brings about our own uniqueness,
through the experiences
we have accumulated in our life,
the deep connection
we share with ourselves and the world around,
as well as the way we live and express our reality.

→We designed this dimension with strong wave
in order to express our own uniqueness and as we are.

Dimension5,
Anandamaya is the spiritual dimension,
that makes us each sacred and
is the very reason why we exist in this world.
It is the connection to the expansive force
of divinity in our hearts.

→We expressed this dimension
with pure no pattern ring but most shining.

These ﬁve rings which express each dimension
were made up as one ring.

the quality of the ring

It is well known in the world that
the spirit of art of design in Japan
is subtle, precise and having warmth.
We are honored that we can introduce

our precious ring which is made by
accomplished craft-people in Japan.

Material
Please imagine that you select
natural and healthy foods,
when you prepare meals for your dearest.
That is the one when we select the material
for making our product.
We are committed to using high purity 950 silver
which has great durability
as its excellent combination and the forging method,
hammering metal again and again.
The material we use is no recycled metal,
concerned less allergy and lasting a long time.

Design
Beauty. Balance. And strength.
Our ring is that these three elements
are implemented intensely
though the traditiona and the latest technology,
based on the abundant experience
as not only a jewelry designer but also an original molder,
and the technique which has been cultivated
in the major jewelry brand.
Everything is connected.
After the process of CG image making,
trial manufacture with the wax
and making trial product so many times,
this ﬁne and delicate design is hereby accomplished
by the devotion of Japanese well-experienced jewelry 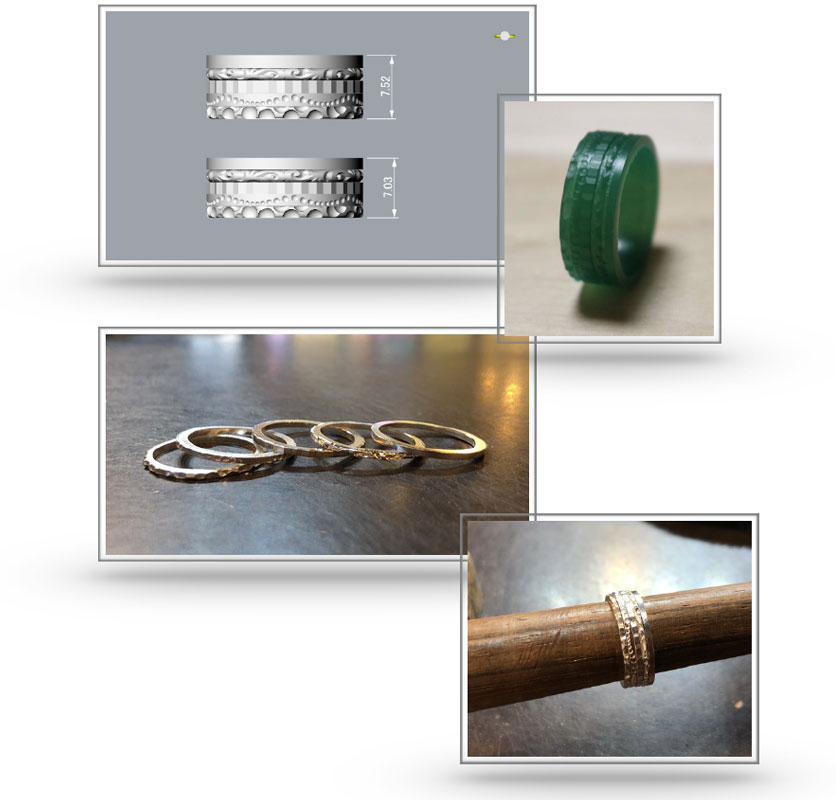 the ring is blessed
with traditional Vedic procedures
like below.

Using ancient traditional Vedic ritual
called Prāna-pratiṣṭha,
the rings are infused with divine energy
so that they function as spiritual insignia,
rather than just material jewellary.
A special set of Mantras will be recited
accompanied with special gestures
that will transfer divine energy
into these specially handmade rings.
Infused with this power,
the rings will serve to help you guide you
in ﬁnding your own path,
removing your obstacles
and exploring into your true potential.

The owner of the ring can also
recite appropriate mantras to revitalise
the power in the ring and sustain it
for a longer duration of time,
seeing the paper of the mantra
which is enclosed with the ring
and hearing the mantra on the special page
which is introduced through QR cord on the paper 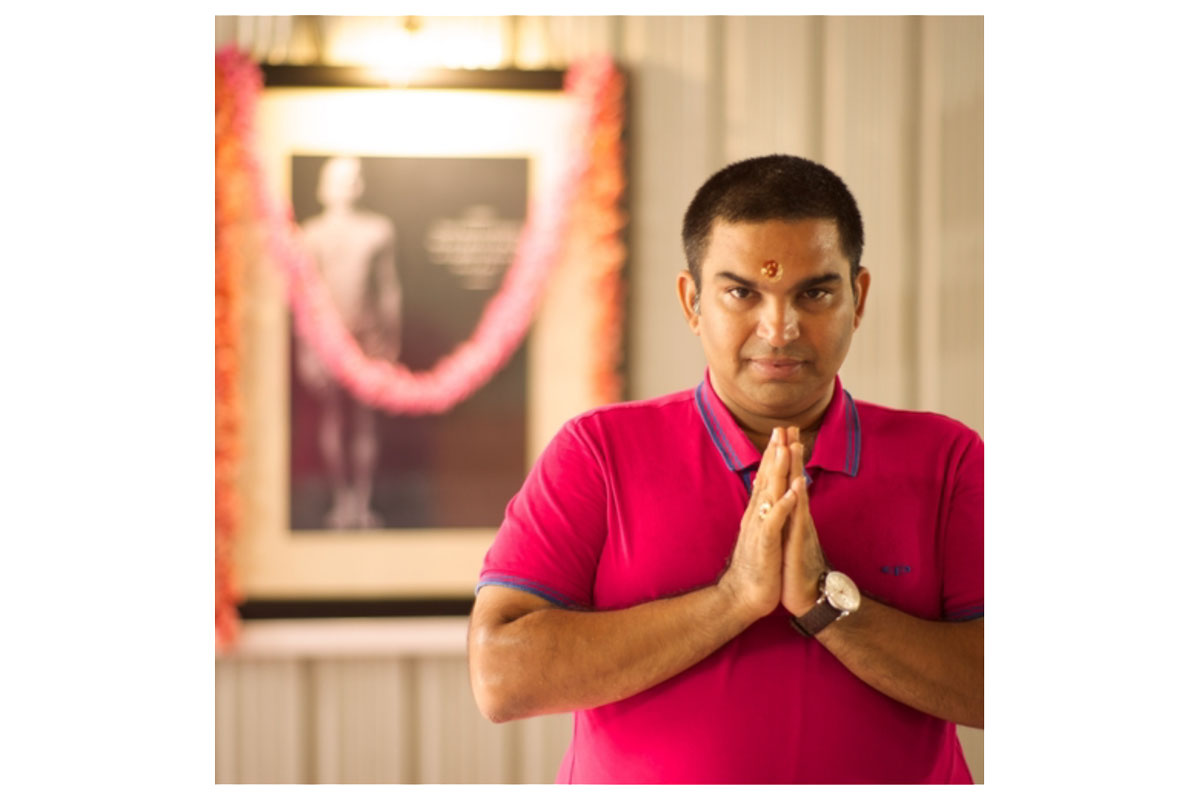 Dr. Kausthub Desikachar is the successor and current lineage holder of the classical Yoga tradition of T Krishnamacharya & TKV Desikachar.

or more than ﬁfteen years, Kausthub has taught a multitude of students and teachers around the globe and has conducted numerous teacher and therapist training programs. Dr. Kausthub Desikachar also works as a Yoga Therapist and oﬀers clients astute and eﬀective solutions for all sorts of physical, mental, emotional and spiritual illnesses. He combines his classical training in Yoga and Ayurveda, his modern education of psychology, and his interactions with traditional healers worldwide, to oﬀer optimum and eﬀective synergetic solutions to alleviate a wide range of problems.

Dr. Kausthub Desikachar is currently an advisor to the Korean Yoga Alliance, Pranamanasyoga (a Yoga Therapy School in Spain),
Be Yoga Norway and also the Yoga Therapy Advisor to Platinum Hospital, Mumbai. He is also an Adjunct Faculty for Yoga Therapy at Council For Yoga Therapy Education and Research (CYTER) at the Sri Balaji Vidyapeeth University, Pondicherry.
He is also in the Editorial Board of Annals of Yoga and Physical Therapy, a newly initiated peer-reviewed open access journal based in 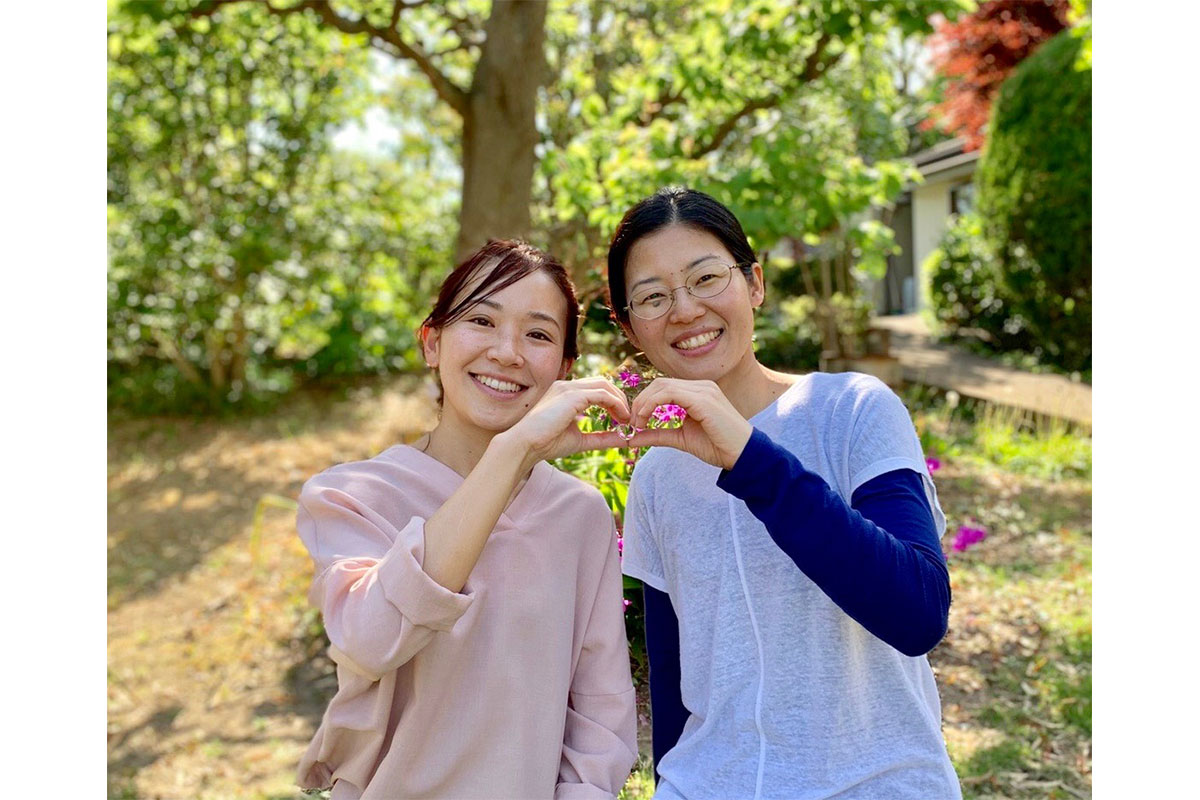 The ring will be sent
from the Japanese yogini
named Akiko,
the representative director of
Yoga Therapist Association in Japan,
and the director Nana
with whole their hearts.

Ms. Akiko Miyahara met yoga when she was an elementary school girl, introduced by her mother of Buddhist,
but what she continued to do was chanting of Buddhism, so she has still distance from yoga itself,
but their root is same vedic philosophy and culture, so her foundation of yoga started to be gradually made up.

Her interest was people's mind peace, so getting a Masterʼs degree in Psychology,
she worked at a consulting company for Human Resource department whose solution is focused on the relationship and motivation of workers.

After delivering her ﬁrst daughter, she was amazingly healed from the unbalanced body&mind state by doing yoga asana deﬁnitely, so she decided to commit herself to becoming a full time yogini and yoga instructor.

Soon she started teaching at and gained trusts of one of most famous studios at Tokyo
and was also in charge of jayachikitsa, healing program that needs even ayurvedic knowledge.
Further, she was led to start her own yoga salon at just front of the station of one of big and most sophisticated area in Tokyo.
Then she taught so many student including celebrities, body trainers and so on.

After a few years later, she was pregnant with second daughter, and decided to move to more calm her hometown
Where is surrounded by mountain and sea and established the Yoga Therapist Association. She has been carrying out her own yoga instructor&therapist course and producing many talented yoga therapists in Japan.

She is also the director of the children support volunteer organization, whose parents are single,
which serves dinner every Tuesday, Thursday and Saturday in her local area.
Through the experiences to have been facing diﬃcult children and teenagers whoʼre really hungry for true love and test her
with abusive languages because of doubt, she really hoped she wanted to be a real person who can love children truly
and thought she have to know the true herself who never be hurted. She wanted to be a person who can encourage them as they are
without any anxiety, even if she wouldnʼt depend on the glasses of the current society.
So she applied to participate the Dr. Kausthubʼs traditional yoga training course.

Through the meeting with Great teacher, Dr. Kausthub, she is feeling she was able to get the seed of real and deep wisdom of yoga, truth of us.
And that wisdom is alive and working her deep level even now. So she is now also cultivating her happiness and satisfaction and nursing the conﬁdence from inside which is needed to love. 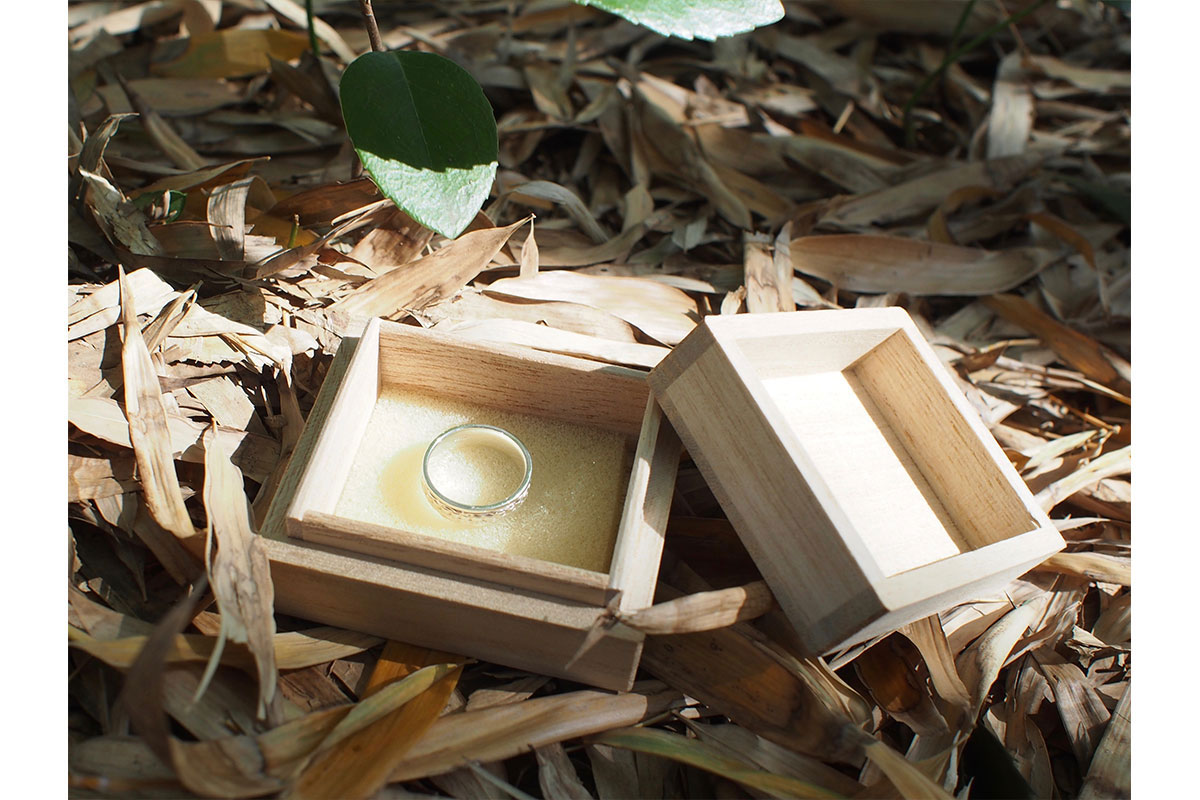 *The shipping cost will be added to the customer based on the location.

The half of benefit of Yoga Therapist Association will be donated to Dharma chaya, the place for children and parents to be relaxed, feel comfortable, and sometimes get inspiration for their life.

We have all sizes. Please let us know the size which you hope!
（Britain size — USA size — Japan size）

You can purchase the ring here.